Deloitte, one the world’s “big four” accounting firms, was the week’s top trending new cybercrime target after it was reported that the firm experienced a breach that compromised some of its clients’ information. 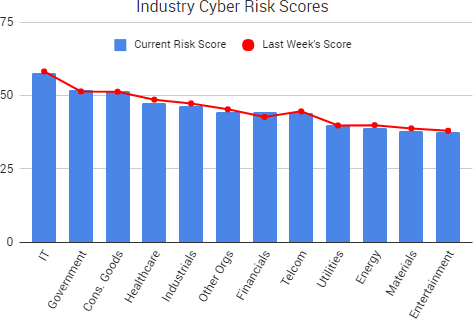 The Guardian reported that Deloitte clients’ information was compromised after a malicious actor gained access to the firm’s global email server through an administrator account that did not have two-step verification enabled.

Six Deloitte clients have been informed of the breach, which was first discovered in March 2017 and may have dated back to October 2016. The Guardian was told that an estimated five million emails could have been accessed by the hackers since emails to and from Deloitte’s 244,000 staff were stored in the Azure cloud service; however, Deloitte said the number of emails that were at risk is “very small fraction of the amount that has been suggested.”

Shortly after The Guardian story broke, Brian Krebs reported that a source close to the Deloitte investigation said the company’s breach involves the compromise of all administrator accounts at the company, that it’s “unfortunate how we have handled this and swept it under the rug,” and that “it wasn’t a small amount of emails like reported.” The source also said that investigators identified several gigabytes of data being exfiltrated and that Deloitte is not sure exactly how much data was taken.

Additionally, The Register reported that what appeared to be a collection of Deloitte’s corporate VPN passwords, user names, and operational details were found within a public-facing GitHub-hosted repository; that a Deloitte employee uploaded company proxy login credentials to his public Google+ page; and that Deloitte has “loads” of internal and potentially critical systems unnecessarily facing the public internet with remote-desktop access enabled.

Last week we noted the malicious version of CCleaner that was downloaded approximately 2.27 million times appeared to have been an espionage campaign designed to gain access to the networks of at least 18 tech firms.

This week Morphisec, the firm that discovered the backdoored version of CCleaner, said that there may be other similar attacks leveraging common applications that have been compromised in an attempt to gain access to even more corporate networks.

The company’s chief technology officer Michael Gorelik said that it is currently investigating historical “false positive” reports in an attempt to discover evidence if other applications have been backdoored. Gorelik said that he believes there were other supply chain attacks like the CCleaner one, and that the initial findings of the investigation were “very interesting.”

As SurfWatch Labs has previously noted, supply chains have proven to be one of the more difficult aspects for organizations to defend against, and malicious actors have shifted their attacks towards weak points in the supply chain to exploit the interconnected nature of organizations. For example, the June spread of WannaCry, perhaps the year’s most widely reported cyber incident, was tied to infections from the updater process for tax accounting software created by the Ukrainian company MEDoc.

The issues around CCleaner and MEDoc have been widely reported, but there are numerous other example of smaller-scale incidents that regularly occur. For example, last month npm, which describes itself as “the world’s largest software registry,” said that it removed more than 40 malicious packages after discovering an actor going by the name “hacktask” had published them with similar names to popular npm packages in an attempt to trick users into downloading them. In addition, popular Android apps, WordPress plugins, and other widely used products are frequently compromised to deliver various types of malware.

The researchers looking into supply chain attacks similar to CCleaner have not yet announced any other potential compromises, but organizations should keep an eye on the story to see if any discoveries occur in the coming weeks regarding applications being compromised to gain access to corporate networks.