Twitter is the week’s top trending cybercrime target after malicious actors leveraged a third-party analytics service known as Twitter Counter to hijack a number of Twitter accounts and post inflammatory messages written in Turkish along with images of Nazi swastikas. Hundreds of accounts were compromised, the Associated Press reported.

A Twitter spokesperson said it removed the permissions of the third-party app, which was the source of the problem. In a series of tweets on Wednesday, Tweet Counter responded to the issue: “We’re aware that our service was hacked and have started an investigation into the matter. We’ve already taken measures to contain such abuse. Assuming this abuse is indeed done using our system, we’ve blocked all ability to post tweets and changed our Twitter app key.”

Twitter hijackings are common, and we do not highlight them in this weekly report very often; however, the Tweet Counter compromise is worth noting due to the supply chain issues it represents. Organizations frequently use third-party services to help manage their numerous social media accounts, and that interconnectedness was one of the central themes of SurfWatch Labs’ annual threat intelligence report. “One of the most telling statistics in all of SurfWatch Labs’ evaluated cyber threat data is the rise of CyberFacts related to third parties,” the report stated. “It is clear that malicious actors are looking for any opportunity to exploit poor cybersecurity practices, and the supply chain provides an abundance of opportunity for cybercriminals to do so.”

Organizations should have a way to track, monitor, and address any issues pertaining to third-party tools and services so they can better manage the increased risk that stems from an interconnected world. 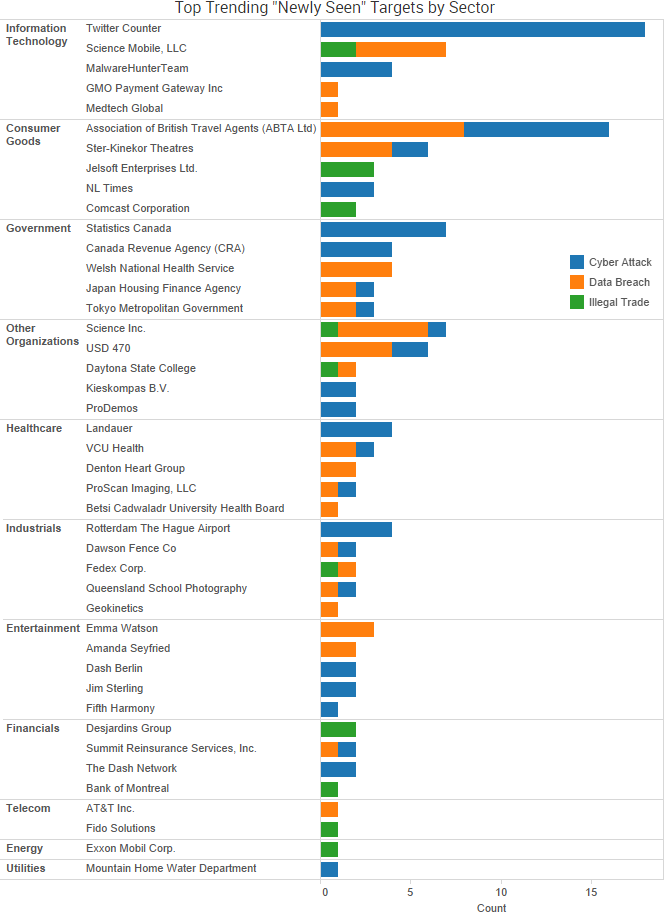 Earlier this month, a patch was issued to address a high-impact vulnerability in Apache Struts Jakarta Multipart parser that allowed attackers to remotely execute malicious code. Shortly after the patch, an exploit appeared on a Chinese-language website,. Researchers then confirmed that attackers were “widely exploiting” the vulnerability. Since then, the issue has continued to affect numerous organizations through data breaches and service downtime.

For example, the Canada Revenue Agency was one of the week’s top trending cybercrime targets after the Canadian government took the website for filing federal tax returns offline due to the vulnerability, temporarily halting services such as electronic filing until security patches could be put in place.

John Glowacki, a government security official, said during a press conference that there was “a specific and credible threat to certain government IT systems,” and Statistics Canada confirmed that hackers broke into a web server by exploiting the Apache Struts vulnerability. Glowacki also said it was his understanding that some other countries “are actually having greater problems with this specific vulnerability [than Canada].”

Surfwatch Labs analysts warn that users with root privileges running on unpatched Apache Struts are at high risk of being fully compromised, and organizations are encouraged to patch Apache web servers as soon as possible.

“Unfortunately, fixing this critical flaw isn’t always as easy as applying a single update and rebooting,” Ars Technica’s Dan Goodin noted. “That’s because in many cases, Web apps must be rebuilt using a patched version of Apache Struts.”