The fast-food chain Sonic said yesterday that it is investigating a possible payment card breach at its stores, and security blogger Brian Krebs reported that the incident may be tied to a batch of five million fresh payment cards being offered for sale on the stolen credit card shop known as Joker’s Stash.

Sonic said its payment card processor informed the company last week of unusual activity regarding cards used at its stores. Krebs reported that two sources purchased a handful of payment cards from the batch of five million credit and debit cards listed on Joker’s Stash, and those sources said the stolen cards had all been recently used at Sonic locations.

A Sonic spokesperson said that the breach investigation is still in its early stages and it is unclear how many of the company’s nearly 3,600 locations may have been impacted.

“It remains unclear whether Sonic is the only company whose customers’ cards are being sold in this particular batch of five million cards at Joker’s Stash,” Krebs wrote. “There are some (as yet unconfirmed) indications that perhaps Sonic customer cards are being mixed in with those stolen from other eatery brands that may be compromised by the same attackers.”

An interesting breach announcement trend in 2017 is the attempt to obfuscate the total number of breached locations behind clunky websites that divide the affected locations into searches not just by state, but by city. Case in point, the breach lookup webpage provided by Arby’s, which mimics the cumbersome and now-defunct webpage set up by InterContinental Hotels Group (IHG) for its recent breach. The IHG website divided the affected locations across hundreds of individual cities, and that tool, along with the news that IHG would update the list as more hotels confirmed breaches, meant frequent travelers had to comb through numerous searches repeatedly in order to find out if they were impacted by a single breach.

The Wendy’s breach, which affected franchise locations serviced by a third-party payment provider, was particularly painful for financial institutions as some locations were re-compromised after initially clearing the malware — leading to customer payment cards having to be re-issued multiple times. The Arby’s breach, by contrast, was caused by malware placed on systems inside corporate stores rather than franchise locations.

It’s unclear at this point which Sonic stores were affected, but the a 2016 report to stockholders said that 3,212 of the company’s 3,557 locations are franchised. The company also announced in 2014 that it was rolling out a new point-of-sale system and proprietary point-of-personalized service technology based on a Micros Oracle platform. In April 2017 it was reported that the update had made its way to 77 percent of Shoney’s locations.

The week’s top trending event was the compromise at Freedom Hosting II, which has been estimated to host as much as 20 percent of active dark web sites. As a result, thousands of dark web sites were taken offline, and the stolen data has since been widely shared.

Security researcher Troy Hunt, who reviewed some of the data, said that 381,000 email addresses were exposed along with a 2.2GB MySQL file that contained database backups of customers with “a very broad range of data from different systems.” Hunt added that “a significant amount” of that data is illegal. The hacker taking credit for the incident told Motherboard that the discovery of 10 sites hosting child pornography was the impetus for escalating the attack from read-only access to gaining system privileges, which was done using a 21-step process.

The other big news of late is the announcement of several new point-of-sale data breaches. InterContinental Hotels Group announced a point-of-sale breach affecting customers who used payment cards at the restaurants and bars of 12 properties, and fast-food chain Arby’s confirmed that malware was discovered on the payment systems of corporate locations. The incidents mirror the beginning of 2016, which saw similar breach announcement from Hyatt hotels and fast-food chain Wendy’s. The IGH breach is smaller than last year’s Hyatt announcement, which likely affected guests at 250 hotels, but the Arby’s breach may be comparable to the Wendy’s breach, which affected 1,025 locations.

More than 1,000 of the 3,300 total Arby’s restaurants are corporate owned; however, not every corporate location was affected, an Arby’s spokesperson said. Arby’s has yet to release official numbers or dates of the incident, but PSCU, a service organization that serves more than 800 credit unions, issued a non-public alert saying that more than 355,000 payment cards issued by PCSU member banks were compromised due to an incident at “a large fast food restaurant chain, yet to be announced to the public.” PCSU also estimated that the fast-food chain breach occurred between Oct. 25, 2016, and January 19, 2017. 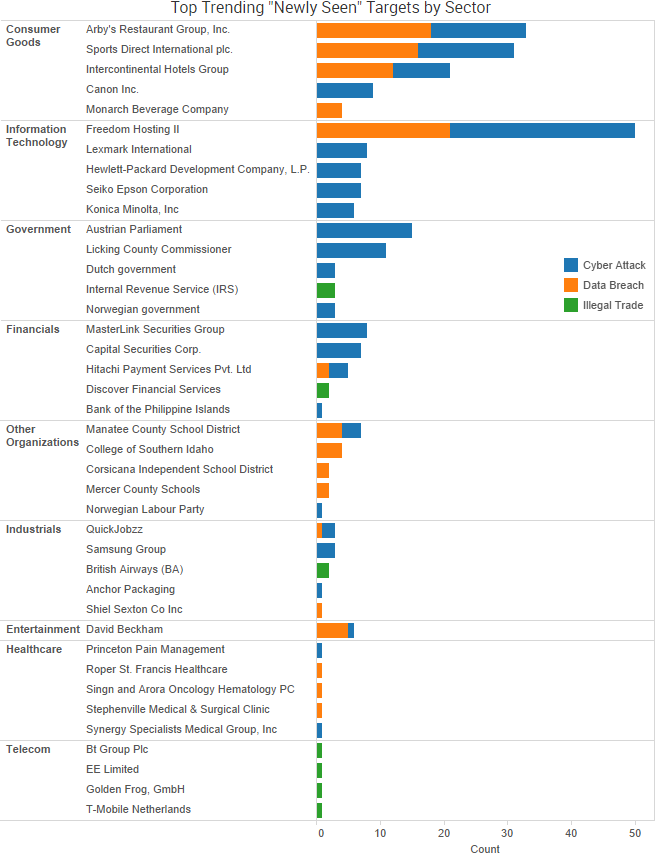 The past week saw the continuation of several stories highlighted in recent risk reports.

For starters, malicious actors are exploiting the recently announced severe content injection vulnerability found in the WordPress REST API, which was fixed in the WordPress 4.7.2 update. At least twenty-four different campaigns are actively defacing WordPress sites. WordFence, which said that this is “one of the worst WordPress related vulnerabilities to emerge in some time,” reported that nearly 1.9 million defaced web pages have been indexed by Google as of February 10.

WordPress has an automatic update feature to protect against newly announced exploits being used by malicious actors, but a large number of websites appear to have disabled that feature and have not updated to version 4.7.2, which has been available since January 26.

As SurfWatch Labs continues to stress in blogs and articles, cyber threat intelligence clearly shows that the security threats are not as complex as some media and vendors make them out to be. Another example of simple but effective attacks is the growing number of organizations publicly tied to W-2 related breaches. Two weeks ago we wrote that the 2017 W-2 breach count had rose to 24 organizations. By last Friday that number had risen to 40. By Monday morning, it rose again to 48 – including school districts, colleges, healthcare organizations, manufacturers, payroll providers, restaurants, retailers and more.

IRS Commissioner John Koskinen warned that “this is one of the most dangerous email phishing scams we’ve seen in a long time.” These impersonation emails, also known as business email compromise scams, have proven to be effective, and they are costly for the organizations that fall victim to them. But they are not complex. They rely on three simple and straightforward aspects all good impersonators utilize:

Many attacks that lead to data breaches are not sophisticated efforts carried out by actors using zero-day exploits; rather, they are opportunistic attacks leveraging public vulnerabilities and simple social engineering tactics. When it comes to managing cyber risk, ensure your organization can defend against these basic attacks before addressing more advanced – and often far less relevant – cyber threats.