Ukrainian power utility Ukrenergo was back in the news as the top trending cybercrime target after researchers analyzed new samples of a destructive malware, dubbed “Win32/Industroyer,” which they said was likely used in the December 2016 attack against the Ukrainian power grid. 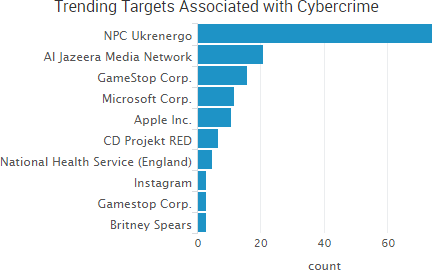 “Industroyer is a particularly dangerous threat, since it is capable of controlling electricity substation switches and circuit breakers directly,” ESET researchers wrote. “To do so, it uses industrial communication protocols used worldwide in power supply infrastructure, transportation control systems, and other critical infrastructure systems (such as water and gas).”

The Industroyer malware uses four payload components designed to gain control of switches and circuit breakers, with each component targeting a particular communication protocol: IEC 60870-5-101, IEC 60870-5-104, IEC 61850, and OLE for Process Control Data Access (OPC DA). The malware is notable as it “is capable of doing significant harm to electric power systems and could also be refitted to target other types of critical infrastructure.”

Hackers may have hidden in Ukrenergo’s IT network undetected for six months before carrying out their December 2016 attack, which led to a power blackout in Kiev that lasted a little over an hour. Although it’s not confirmed, it is “highly probable” that Industroyer was used in that incident. The Ukrenergo attack occurred a year after a similar attack against Prykarpattyaoblenergo, which caused approximately 230,000 people to lose power. Researchers have warned that both of those incidents in Ukraine could be tests for potential attacks against Western countries’ critical infrastructure facilities in the future. 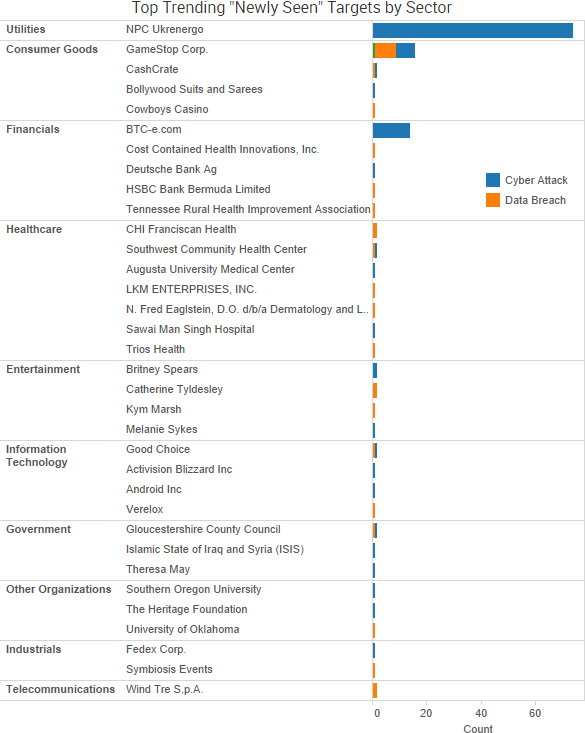 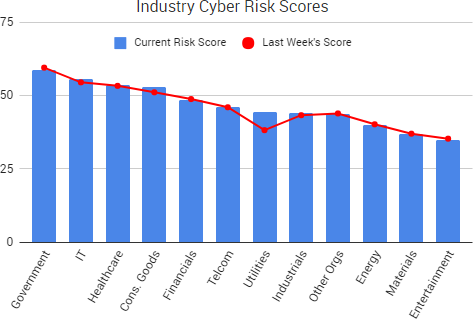 According to the attorney general, an October 2015 data breach of CoPilot’s website administration interface, PHPMyAdmin, allowed an unauthorized user to download reimbursement-related records for 221,178 patients, including their names, genders, dates of birth, addresses, phone numbers, and medical insurance card information. However, CoPilot did not begin formally notifying affected consumers until January 2017, more than a year after the incident occurred — an “unacceptable”  violation of New York law.

“Although CoPilot asserted that the delay in providing notice was due to an ongoing investigation by law enforcement, the FBI never determined that consumer notification would compromise the investigation, and never instructed CoPilot to delay victim notifications,” New York’s attorney general wrote. “General Business Law § 899-aa requires companies to provide notice of a breach as soon as possible, and a company cannot presume delayed notification is warranted just because a law enforcement agency is investigating.”

In January, the U.S. Department of Health and Human Services, Office for Civil Rights (OCR) issued a $475,000 fine to Presence Health for similar reasons. OCR said that it was the agency’s first HIPAA settlement based on the untimely reporting of a breach of unsecured protected health information and that the settlement amount “balanced the need to emphasize the importance of timely breach reporting with the desire not to disincentive breach reporting altogether.”

That regulatory scrutiny may get more intense with the enforcement of the EU’s General Data Protection Regulation (GDPR) next year. The GDPR requires companies notify the appropriate authorities of a breach within 72 hours of discovery if that company collects, stores, or processes personal data for people residing in the EU. As SearchSecurity noted last month, that could force a change for the better when it comes to prompt breach notification by companies since the monetary penalties associated with violating the GDPR are much harsher than the current regulations.

This week’s top trending cybercrime story is a hack that wasn’t: Vermont’s Burlington Electric Department. A December 30 Washington Post story falsely claimed that Russian threat actors had penetrated the U.S. power grid via the Vermont utility. That story has since been widely debunked, as the alleged international hacking incident was set off by a department employee simply checking his Yahoo email account. The employee’s actions triggered an alert, as it matched an IP address tied to indicators of compromise released by the Department of Homeland Security related to the alleged Russian hacking around the U.S. presidential election. 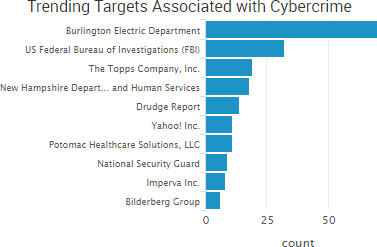 “We uploaded the indicators to our scanning system to look for the types of things specified,” Burlington Electric Department general manager Neil Lunderville told Fortune. “Then sometime on Friday morning, when one of our employees went to check email at Yahoo.com, our scanning system intercepted communications from that computer and an IP address listed in the indicators of compromise. When warned of that, we immediately isolated the computer, pulled it off the network, and alerted federal authorities.”

The incident involved a single computer not even connected to the grid control systems, he added.

The false story comes on the heels of a report issued by DHS and the FBI on Grizzly Steppe, the U.S. code name for the malicious cyber activity carried out by the Russian civilian and military intelligence services. That interference led President Barack Obama to sanction four Russian individuals and five Russian entities, as well as to order 35 Russian diplomats to leave the country and close two Russian compounds. 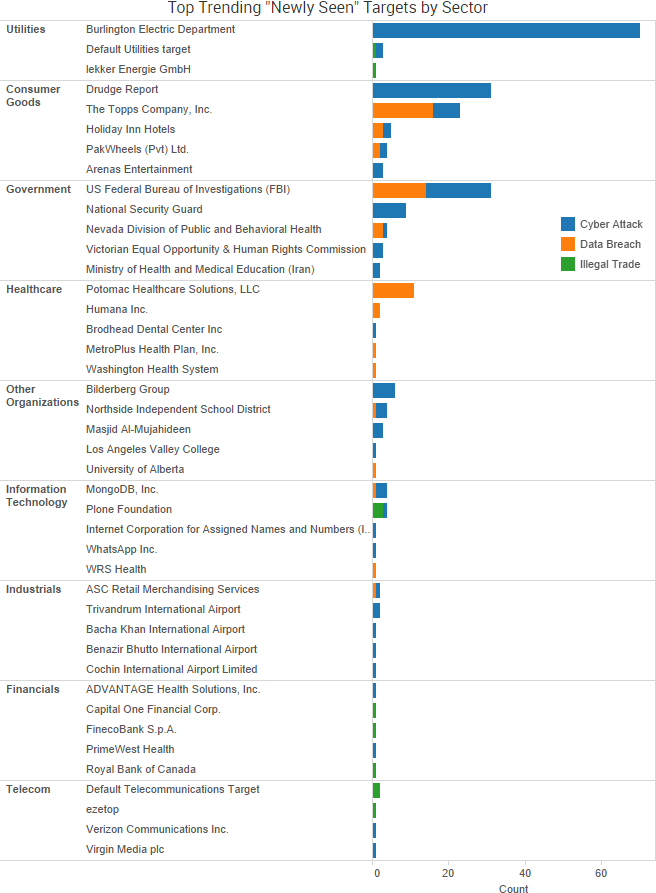 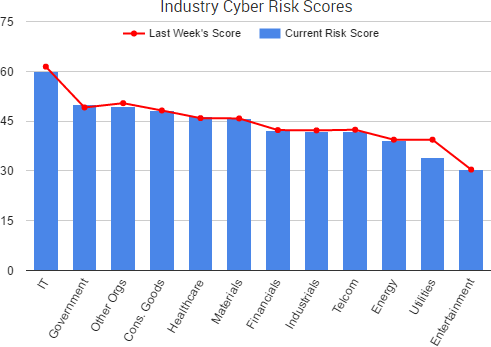 Organizations once again are being blackmailed by threat actors who are either threatening to release stolen data or else holding data hostage unless a ransom payment is made.

TheDarkOverlord is continuing its well-established tactic of hacking, extorting and then dumping data on a variety of targets. According to databreaches.net, “TDO appears to have dumped pretty much everything of any significance from two of the previously disclosed victims companies, Pre-Con Products, LTD, and G.S. Polymers, Inc. Other entities whose data TDO dumped include PcWorks, L.L.C. (in Ohio), International Textiles & Apparel, Inc. in Los Angeles, and UniQoptics, L.L.C. in Simi Valley.”

A new extortion campaign is being carried out by an actor using the name “Harak1r1.” The hacker is hijacking insecure MongoDB databases, stealing the data, and replacing the data with a single table and record called “WARNING.” The actor then attempts to extort the victims to recover their data. Researchers said the campaign is ongoing and that between Tuesday and Wednesday the number of compromised databases rose from around 2000 to more than 3500. The actor requests a 0.2 bitcoin ransom payment for victims to regain access to the files, which at least 17 companies have paid. The actor appears to be manually selecting the targets based on databases that appear to contain important data, according to Victor Gevers, co-founder of GDI Foundation.

Interestingly, it appears that a second threat actor may be using the same tactic, but charging 0.5 bitcoin instead, according to a Wednesday tweet addressed to Gevers.

As of Saturday afternoon, the second bitcoin address had 11 bitcoin transactions totaling 3.31 bitcoins, so it is possible that more victims are making ransom payments.

Yahoo remained as the top trending cybercrime target due to a data breach affecting more than a billion accounts. The breach is so large that regulators such as the FTC and SEC are facing uncharted territory when it comes to potential fines or other consequences related to the incident, Vice News reported. 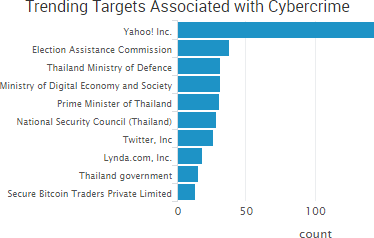 Looking beyond the ongoing Yahoo story, there were several unique cybercrime-related events worth noting from the past week.

For starters, a data breach at Kia and Hyundai aided in the physical theft of dozens of cars, Israeli police said. Criminals were able to use the stolen data to make car keys for luxury cars and steal those cars directly from the owners’ homes. The three men who were arrested allegedly looked for the registration numbers on Kia and Hyundai models and then used those number along with stolen anti-theft protection numbers and other codes to make keys for each specific car. Once the keys were made they would visit the owners homes — the information was also in the stolen data — to steal the vehicles and then sell them on the Palestinian car market.

Another interesting story is the recent sudden shutdown of a power distribution station near Kiev, which left the northern part of the city without electricity. Vsevolod Kovalchuk, the acting chief director of Ukrenergo, told Reuters that the outage was likely due to an external cyber-attack. The outage amounted to 200 megawatts of capacity, which is about a fifth of Kiev’s nighttime energy consumption. 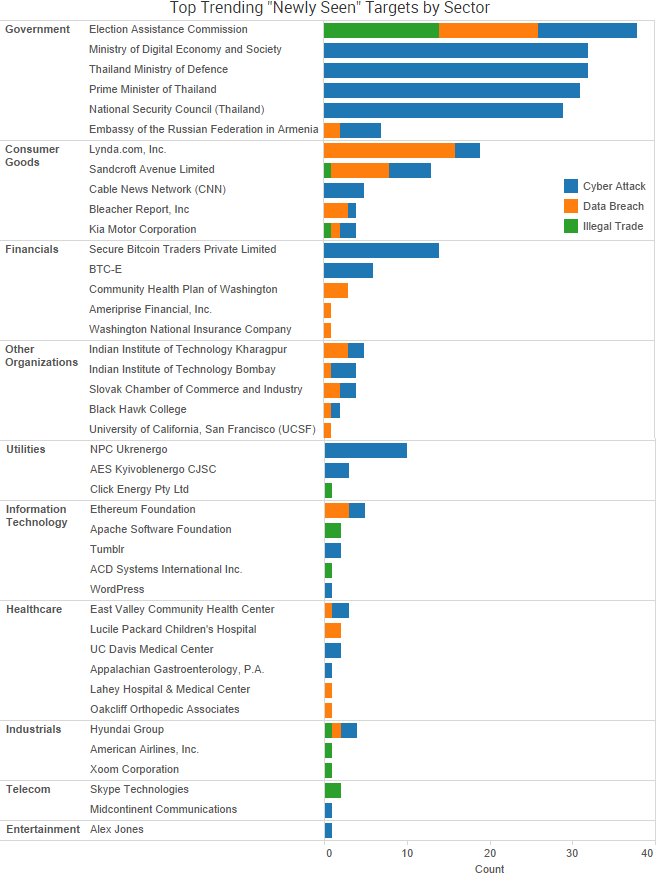 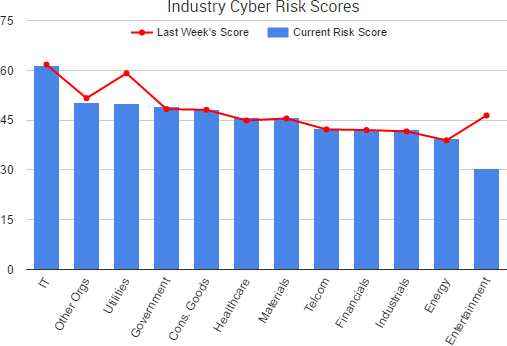 Several stories from the past week once again highlighted the problem of malicious insiders stealing intellectual property and taking that stolen data directly to company rivals in order to give those rivals a leg up on the competition.

The employees left Quatrro Global Services in late 2014 and early 2015 and opened the rival company in January 2016. The complaint alleges the database was “used to derive unlawful commercial benefit by accessing our customers, leading to our commercial loss while gaining unauthorised access to our customer’s personal information, which could be used for unlawful purposes.”

A separate case involves David Kent, 41, who recently pleaded guilty to stealing more 500,000 user resumes from Rigzone.com, a company that he sold in 2010, and then using the stolen data to boost the membership of his new oil and gas networking website, Oilpro. According to the complaint, Rigzone’s database was hacked twice, and its members were subsequently solicited to join Oilpro. After building up the membership base in this manner, Kent then tried to sell the Oilpro website by stating that it had grown to 500,000 members through traditional marketing methods.

As SurfWatch Labs noted in October, insider threats are one of the most difficult challenges facing organizations. A recent survey of 500 security professionals from enterprise companies found that one in three organizations had experienced an insider data breach within the past year and that more than half of respondents believe that insider threats have become more frequent over the past year.

SurfWatch Labs data confirms those security professionals worry, having collected data on more than 240 industry targets publicly associated with the “insider activity” tag over the past year.