In April 2016, the dark web market Nucleus went offline. Before its disappearance, Nucleus had become the number two most popular market on the dark web, hosting tens of thousands of listings for a variety of illicit goods and services. The debate continues around why Nucleus vanished; however, it was just one of the many different markets where users could go to anonymously purchase credentials to customer accounts, stolen payment card data, pirated software, counterfeit currency and goods, malware, hacking services and more.

Knowing this can be quite useful to businesses and threat researchers. It can be leveraged for valuable cyber threat intelligence including the kind of data being bought and sold by cybercriminals, tools and services that are commonly used, and vulnerabilities that are being actively exploited. Most importantly, the dark web provides much needed context. But with the huge number of threats out there, some legitimate and some not, where should organizations focus their resources? Threat intelligence from the dark web can help provide businesses with that important insight. With that in mind, here are five of the most common items for sale on the dark web, and how that information can help organizations combat cybercrime, according to SurfWatch Labs data.

Although a wide variety of cybercrime-related items are for sale on the dark web, stolen credentials are among the most prevalent. When looking at the most popular dark web market in 2016, credentials trade accounts for nearly a quarter of the data collected by SurfWatch Labs. Cybercriminals initially get this information by using phishing messages, malicious applications, and other methods to get malware such as keyloggers installed on victims’ devices. These stolen usernames and passwords often end up for sale on the dark web where other malicious actors then use them for a variety of purposes. Although online banking accounts are a natural target, other types of credentials readily available for purchase include employee and personal email accounts, social media accounts, eBay and PayPal accounts, and other popular services such as Netflix, Uber, and more.

How this can help your organization: With the huge number of data breaches and stolen credentials out there, it is likely that some employees have had their usernames and passwords compromised, and in many instances those include work-related email addresses. Monitoring the dark web for stolen credentials related to your brand and your employees can allow you to educate users, prevent fraudulent logins and stop a future attack from spreading.

When a point-of-sale data breach occurs, that stolen payment card information often ends up for sale on various dark web markets. Cybercriminals act very quickly to monetize those accounts. The longer a stole card is on the market, the less valuable it becomes due to the likelihood of it being tied to a data breach, theft, or other fraud — and cancelled by the bank or cardholder. Other items for sale related to fraud include counterfeit documents such as passports and driver’s licenses as well as personal information needed to open lines of credit such as Social Security numbers, dates of birth and other identifiers. Like traditional crime, cybercrime is largely driven by money, and fraud and stolenidentities have traditionally been the go-to methods for turning a quick profit. However, it is not just the occasional thugs perpetrating these acts. It is often professional cybercrime rings run by gangs in other countries that have been perfecting their techniques for years.

How this can help your organization: Many point-of-sale data breaches aren’t discovered until the stolen payment card information shows up for sale or fraudulent charges begin occurring on enough cards to pinpoint a source of the compromise. By finding the stolen information sooner rather than later, retailers and financial institutions can shorten the shelf life of stolen cards and reduce potential losses. 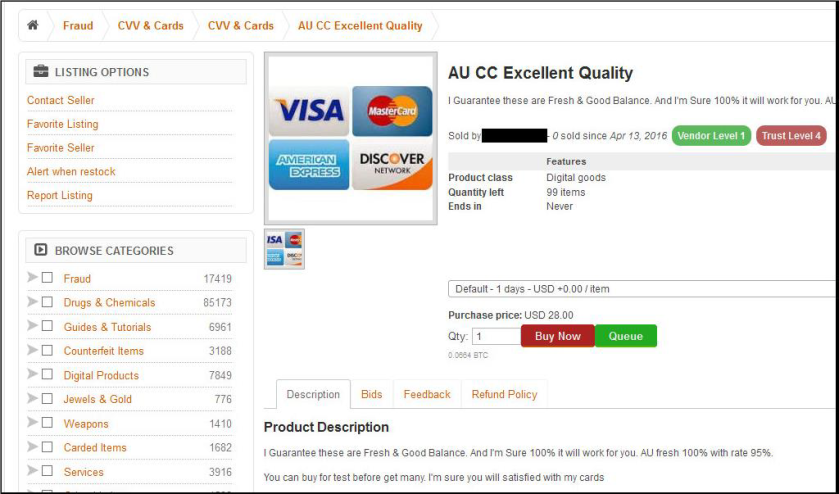 Media piracy is a popular practice on the dark web. Stolen ebooks, music, movies and other forms of entertainment are sold at a fraction of the cost — with none of the profits going to the creators. In addition to piracy, even more damaging forms of intellectual property are bought and sold on the dark web. This may include source code, stolen customer lists, trade secrets and other sensitive data stolen from organizations. A report by the Commission on the Theft of Intellectual Property stated that stolen intellectual property costs the United States as much as $300 billion each year, and the Center for Responsible Enterprise and Trade estimates trade secret theft costs between one and three percent of the GDP of advanced economies. Not all of that is sold on the dark web — much of it is nation-state espionage — however, of all the items for sale on the dark web, intellectual property tends to be the most impactful and have the most long-term consequences for organizations.

Effective threat intelligence should include all the cyber risks facing an organization, including risk faced by third-party partnes and vendors. Vendors may have their own credentials or intellectual property for sale on the dark web, or there may be relevant vulnerabilities that are being actively exploited by malicious actors. Those potential issues may move down the supply chain and impact other organizations along the way. For example, in April 2016 SurfWatch Labs threat intelligence analysts uncovered a breach into web hosting provider Invision Power Services, whose customers include professional sports leagues as well as major media and entertainment companies. A malicious actor indicated plans to infect those brands’ users with malware. Although these incidents are often not the direct fault of those companies, the fallout from customers, investors and regulators does tend to fall directly at the feet of those organizations.

In addition to stolen items, malicious actors can purchase many different types of hacking tools and services. One popular market actually began by specializing in selling zero-days and other rare exploits. For example, one user was previously selling a new way to hack Apple iCloud accounts for $17,000. Other items for sale include exploit kits, keylogging malware, phishing pages, remote access Trojans, hacking guides and more. The cybercrime tools purchased may even come with subscription services, easy-to-use interfaces, technical support and other features often associated with legitimate software. In addition, cybercrime services are for sale including distributed denial-of-service attacks, doxing and help hacking accounts. The cybercrime-as-a-service model has segmented the market so that actors can specialize in their own field, whether that is running a botnet, creating exploit kits or stealing credentials. All types of cybercrime tools and services are available — for a price.

How this can help your organization: Knowing what tools are readily available and popular can help organizations defend against common attack methods. In addition, new exploits that are put up for sale or modifications to existing tools can provide insight into how cybercriminals are evolving their attacks in order to evade detection. This context, combined with other dark web threats, can help provide the necessary threat intelligence to help effectively guide your organization’s cyber risk management strategy.

Adam Meyer has served in leadership positions in the defense, technology, and critical infrastructure sectors for more than 15 years. Prior to joining SurfWatch Labs, Mr. Meyer was the Chief Information Security Officer (CISO) for the Washington Metropolitan Area Transit Authority, one of the largest public transportation systems in the United States. Preceding his role as a CISO, Mr. Meyer served as the Director of Information Assurance and Command IA Program Manager for the Naval Air Warfare Center, Naval Air Systems Command one of the Navy's premier engineering and acquisition commands. View all posts by Adam Meyer

2 thoughts on “Top 5 Items for Sale on the Dark Web, and What Businesses Can Learn From Them”