The massive distributed denial-of-service (DDoS) attack that disrupted websites and services on October 21 was the focal point of a large portion of cybercrime discussion last week. As we noted in a previous post, the attack against DNS provider Dyn has led to widespread concern about insecure Internet-connected devices and calls for government agencies to get involved in order to ensure those devices are secured against future attacks.

According to some reports, the DDoS attack may have surpassed one terabyte per second of traffic; however, the latest analysis from Dyn indicates that the botnet behind the attack may have been much smaller than the initial reports of “millions.”

“It appears the malicious attacks were sourced from at least one botnet, with the retry storm providing a false indicator of a significantly larger set of endpoints than we now know it to be,” wrote Scott Hilton, EVP of products at Dyn. “We are still working on analyzing the data but the estimate at the time of this report is up to 100,000 malicious endpoints. We are able to confirm that a significant volume of attack traffic originated from Mirai-based botnets.”

Other trending DDoS news includes the Syrian Cyber Army claiming responsibility for attacks against Belgian news organizations. The DDoS attacks made several news websites inaccessible or extremely slow, including De Standaard, Het Nieuwsblad, Gazet van Antwerpen, Het Belang van Limburg and RTFB. In another case of ideological hacktivism, Martin Gottesfeld, 32, was indicted for his role in DDoS attacks against Boston Children’s Hospital (BCH) and the Wayside Youth and Family Support Network. Gottesfeld admitted to his involvement in #OpJustina in a written editorial, saying that the attack against BCH was designed to interfere with a fundraiser in order to cause maximum financial damage. Finally, The Guardian is reporting that financial institutions in London are stockpiling bitcoins in the event extortionists target them with powerful DDoS attacks.

Note: Dyn, by far the top trending new target, is not shown in the chart below in order to make the other targets more readable.

The Financials sector’s cyber risk score peaked in early October, reaching its highest level since February 2016. Since then, it has steadily declined for most of the month — until the past week. This week’s rise in cyber risk score (+2.2%) was the biggest increase of any sector over the period. 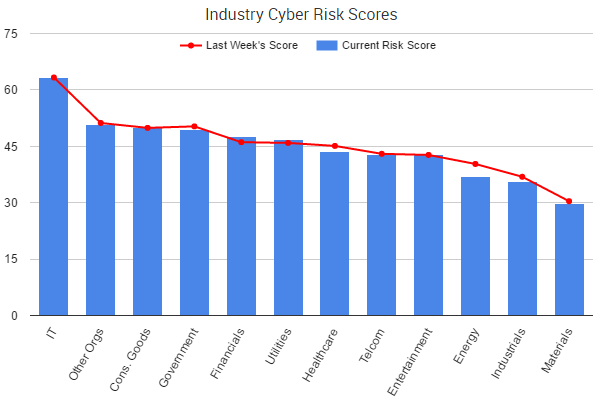 Part of that may be tied to the recent payment card breaches highlighted above, which began at online retailers and other providers before moving to directly impact banks. For example, the chief executive of National Payments Corp of India said that the spike in reported fraud that led to advising banks to replace cards was tied to a possible compromise of one of the payment switch provider’s systems. Sources told Reuters that the issue stemmed from a breach in systems of Hitachi Payment Services, which is currently investigating the matter.

That interconnectivity of the Financials sector has led to concerns from government agencies, and the the Board of Governors of the Federal Reserve System, the Office of the Comptroller of the Currency and the Federal Deposit Insurance Corporation recently issued a joint proposal on enhanced cyber risk management standards to address those concerns.

“Due to the interconnectedness of the U.S. financial system, a cyber incident or failure at one interconnected entity may not only impact the safety and soundness of the entity, but also other financial entities with potentially systemic consequences,” the proposal stated. “The enhanced standards would be designed to increase covered entities’ operational resilience and reduce the potential impact on the financial system in the event of a failure, cyber-attack, or the failure to implement appropriate cyber risk management.”

The enhanced standards would apply to certain entities with total consolidated assets of $50 billion or more on an enterprise-wide basis, they added. Comments on the proposal are open until January 17, 2017.