The European Commission is the top trending cybercrime target over the past two weeks after experiencing a distributed denial-of-service attack (DDoS) that brought down Internet access for several hours over two separate periods, making it difficult for employees to work, a staff member told Politico.

However, the most impactful event from the period is the campaign that targeted organizations in Saudi Arabia with the Shamoon malware and wiped the hard drives of thousands of computers. The campaign targeted six organizations, resulting in extensive damage at four of them. People familiar with the investigation told Bloomberg that thousands of computers were destroyed at the headquarters of Saudi’s General Authority of Civil Aviation and that office operations came to a halt for several days after critical data was erased. Among the other targets were the Saudi Central Bank and several unnamed government agencies.

Saudi authorities said evidence suggests Iran is to blame. The attackers used the exact same Shamoon malware that hit Saudi Aramco in 2012 and destroyed 35,000 computers, according to people familiar with the investigation. Ars Technica noted that Shamoon attempts to spread across networks by turning on file sharing and attempting to connect to common network file shares. In addition, the attackers used stolen credentials hard-coded into the malware.

Shamoon is made up of three components. The dropper component determines whether to install a 32-bit or 64-bit version of the malware. The wiper component uses RawDisk, the same driver that was used against Sony Pictures in 2014. The communications component was not used in this attack as the malware was configured with the IP of 1.1.1.1.

SurfWatch Labs collected data on many different companies tied to cybercrime over the past two weeks. Some of those “newly seen” targets, meaning they either appeared in SurfWatch Labs’ data for the first time or else reappeared after being absent for several weeks, are shown in the chart below.

Over the past two weeks, most industry sectors have seen an increase in their SurfWatch Labs’ cyber risk scores. The IT sector, once again, has the highest overall score. That is due, in part, to ongoing worry over DDoS attacks tied to Marai and other botnets compromised of Internet-of-Things devices. 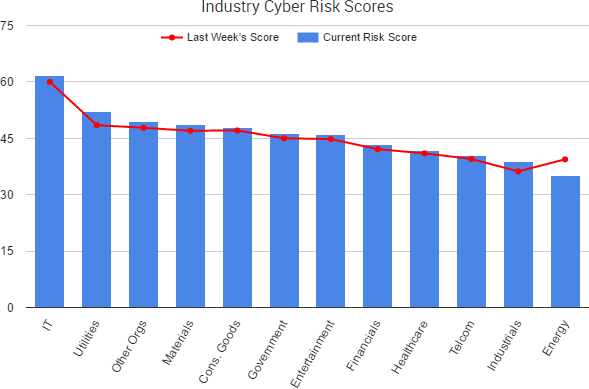 Around 900,000 customers of Deutsche Telekom had their service disrupted due to external actors trying and failing to infect routers with malware, the company said. The attack caused crashes or restrictions on approximately four to five percent of all routers. Thousands of KCOM customers also lost their Internet access due to routers being targeted in a cyber-attack. KCOM issued a statement about the incident:

“We have now identified that the root cause of the problem was a cyber attack that targets a vulnerability in certain broadband routers, causing them to crash and disconnect from the network. The only affected router we have supplied to customers is the ZyXel AMG1302-T10B. The vast majority of our customers are now able to connect to and use their broadband service as usual.”

Researchers have identified other companies that use routers made by ZyXel and may be vulnerable to similar attacks, including Irish telecom operator Eir and Vodafone Group Plc in Britain.

Two hackers have since claimed credit for the attack against Deutsche Telekom and apologized for the outage. They were trying to enlist those routers in a growing Marai botent, which they claim is now the most powerful Marai-based botnet. One of the hackers told Motherboard the botnet included over a million devices; however, other researchers have estimated that number to be around 400,000.

The hackers, going by the name BestBuy and Popopret, are advertising a DDoS service powered by their new botnet with attacks allegedly ranging up to 700 Gbps.

Popopret told BleepingComputer that the price for a two-week long attack using 50,000 bots — and an attack duration of one hour along with a 5-10 minute cooldown time between attacks — is approximately $3000-$4,000. BestBuy reported similarly high fees, telling Motherboard that a similar attack using 600,000 bots would cost $15,000-$20,000.

It is unclear exactly how many devices the group controls at the moment, but it is clear that various groups are competing to infect and retain control over a growing number of Internet-connected devices.